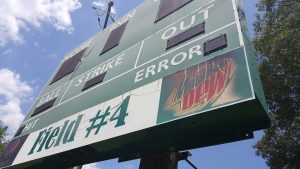 I played baseball from Little League through high school and summer town-team ball. I always enjoyed playing, but I was not a good hitter (today, I would probably be considered a “replacement level player”). So, to stick on a team and get a little playing time, I focused on defense and base-running. I could play any position on the field, and was fast enough to pinch-run and leg out some hits.

My senior year in high school, 1970, we had a really good high school baseball team in my hometown of Staunton, Illinois. I didn’t get much playing time, but I did have a big moment as a pinch-runner. It happened like this: we had a really good starting pitcher and a good second pitcher. That’s all you needed to play two games a week in the short spring season. Our starter won a lot of 1-0 games. As I recall, we were winning a ball game 4-0 late in the game when, I forget how, the opposing team loaded the bases with two outs. The next batter up hit a long fly to left field – I was sure our outfielder had it as he drifted back to the fence – but the ball bounced off his glove AND OVER THE FENCE FOR A GRAND SLAM!

Now the game is tied 4-4 and it’s the bottom of the 7th inning (the last inning in high school where I played). Our big first baseman opens the inning hitting a double. He was really slow. So, as our second baseman moves from on-deck to the plate, I hear our coach call my name from the third base coaching box … “Cely, WHEELS!!” I get off the bench, grab a helmet, and trot out to second base. First pitch is hit up the middle for a single and I’m hustling to third and Coach is waving me home. I figure it’s going to be close at the plate, but our next on-deck batter is waving to me to stand up and not slide. I easily crossed with the winning run.

For a guy that didn’t get much playing time even at this level, it was THE HIGHLIGHT of my high school career!