Whitey Herzog, better known as Relly to his schoolyard buddies, grew up to play Major League Baseball and later became a Hall of Fame manager for the Rangers, Angels, Royals, and Cardinals. With the Cardinals, where he brought his “Whitey Ball” style of play, those teams won 3 National League pennants and a World Series Championship during the 1980s. As any Cardinal fan will tell you, if not for an out-of-control tarp and two ridiculously bad calls at first base (remember Don Denkinger and Kent Hrbek), it could have been three World Series Championships.

I didn’t believe my interview with Whitey was going to happen. In my initial pitch to his representative, I was told he

wasn’t interested in interviewing with me. I let that refusal sit for a while as I was working on scheduling other interviews. Still, for whatever reason, I decided to give it another try, and the second time around faired much better. Of the type of interviews I’ve done, in-person vs. phone, I prefer the in-person interview, not because I would get to meet a former professional baseball player, but because I believed I could do a better job with the interview. Well, my interview with Whitey was a phone call, and our phone connection was not very good. During the entire interview, as I’m checking my primary points, listening to his answers, and making a note of follow-up questions, in the back of my mind, I’m thinking, “I’m not going to get any useful dialog from this interview.” And let me tell you something … knowing the phone connection is bad, trying to act as a sound engineer with a Sony digital recorder and Motorola cell phone, plus staying on task with the interview, my brain was at its limit. To my amazement and delight, once I started the transcription and the audio came through, I realized we had a great conversation, Whitey is a great storyteller, and we had great content to share.

Born April 17, 1931, in New Athens, IL., Whitey grew up playing baseball and basketball with his friends. In the summertime, they would start right after breakfast and play until their moms called them home for dinner. After dinner, everyone was back out playing some sort of game, marbles, mumbly peg, or some type of short-handed game of baseball. Whitey explained, New Athens was a town of German descent, and most of the men were, as he said, “Consumers of beer,” so after dinner, the kids had to find something to do themselves, and playing ball was it.

Whitey didn’t play any organized baseball until he and his friends reached high school, but that’s not to say all of those games they played were not beneficial in his development as an athlete because he would tell you, without a doubt, those games made him a ballplayer. From the 6th grade through high school, he played with basically the same group of kids, making it to state tournaments in basketball and baseball. I’m not going give away the stories of those teams and games, but I will say there is a connection between Whitey’s high school athletic career and the feelings he had after winning the World Series in 1982, something that may surprise many of you once you hear the whole story.

Nicknames play a big part in the youth culture, and when a nickname sticks, it’s yours forever. Now, the nickname Whitey didn’t come about when he was a

kid; even though he was a toe-head, it was Relly … he was tagged with the nickname Whitey while playing in the minor leagues. Of the other players I’ve interviewed, such as Boog Powell and Hawk Taylor, they’ve had colorful nicknames and a funny or entertaining story of its origin. With Whitey, the entertaining story isn’t how he got his nickname; it’s how he ended up with his God-given name of Dorrel Norman Elvert Herzog. For you people of a certain age, like me, his naming story may bring back memories of family members and the less-than-normal names that were given to kids. Consider my dad; his parents forgot to add a middle name on his birth certificate, which created several issues over the years, especially his time in the military. Then there is his brother. Well, they just wrote down two letters on his birth certificate, forgetting to add what everyone assumed was his actual name, and to top it off, someone added an S to his last name, the only bloodline Parks in our family. Thankfully my grandparents weren’t responsible for naming everyone in the community. 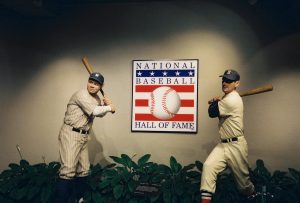 As I wrote in the beginning, Whitey is a great storyteller. His stories about playing high school baseball and basketball are entertaining and insightful. He has thoughts on who was the greatest hitter he ever saw and who he thinks is the greatest pure baseball player ever (can you guess?). And finally, if you remember my first post and the mention of a player that stored his bubblegum on his window sill at night, you may want to check out Whitey’s comments about baseball cards.