Lois Youngen-Winning with a Girl! 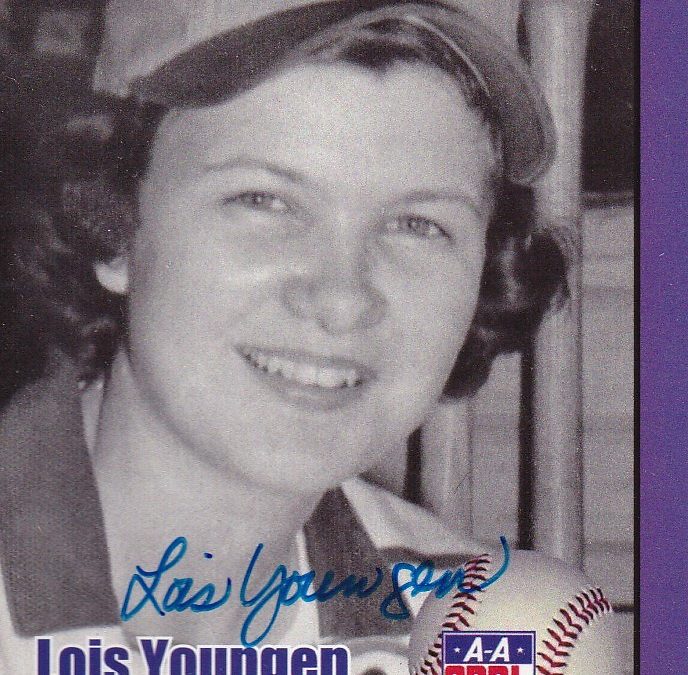 Winning with a Girl! 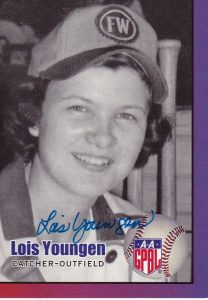 Winning with a girl, that was the dilemma faced by Lois Youngen and the boy’s baseball town team. As the story goes, the team … but wait; before finishing this story, you probably need to get to know a little more about Lois.

Lois came by her athletic abilities honestly. Her dad was a pitcher in college at Kent State University, and not only was Lois’ dad a star pitcher; he was also the captain of the baseball team. According to Lois, her dad had a lot of movement on his fastball and a good curveball; he was just a little too small to make it at the next level. As Lois became interested in baseball, her dad would position her in front of their garage door and throw to her, catching everything he had to offer. As her skills developed, he began putting more and more movement on his pitches to the point she became a very good catcher. When the town baseball team asked Lois to play with them, and when given the choice of playing right field or catcher, catcher was the choice because she wanted to be involved with every pitch and in every play.

The kids organized the town team Lois played on; they didn’t have coaches or a formal league, they just scheduled their games with other town teams, and instead of asking a parent to drive them to the game, they would walk to whichever 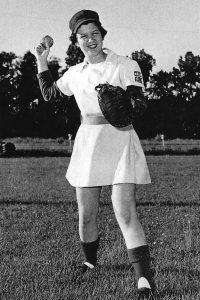 field the teams had agreed to play on. Lois credits those games and the players having the responsibility of organizing games as very important in her development as a baseball player.

As Lois got older, the local softball teams recruited Lois to play with them. These teams became aware of Lois because of her ability to play on the boy’s baseball team. By this time, she was a full-time catcher, and as she told me, the catcher’s equipment was not exactly designed and sized for girls. Her stories of modifying and sizing her catcher’s equipment show her determination to play and succeed as a player.

Lois played in the All American Girls Professional Baseball League for four years, from 1951 through 1954. In 1953, while playing for the South Bend Blue Sox, Lois was the catcher when Jean Faut, a star pitcher in the league, pitched a Perfect Game. Lois was a contact hitter during her AAGPBL career, posting batting averages of .313 in 1952 and .284 in 1954, which ranked her as one of the top hitters of the year. 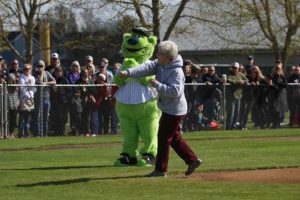 Lois’ AAGPBL career not-withstanding, how she got her tryout is an interesting story that would never happen today. Lois confidence in her athletic ability and a cousin that recognized her ability secured her tryout during a family visit to an AAGPBL game. Lois was sitting at the game knowing she could play with these girls, and the next day she was on the field trying out for the Hall of Famer, Max Carey. After waiting for six months, Lois received a letter inviting her to spring training, but she was still in high school. If you think her tryout story is something you could never imagine happening today, her re-telling of how she was allowed to go to spring training as a high school senior will be a story you read several times to make sure you completely understand what a crazy schedule the AAGPBL players had. The three-week spring training with the Fort Wayne Daisies would make a “rock star” ask themselves, “What have I gotten myself into?”

Upon retiring from professional baseball, Lois graduated from Kent State University with a degree in Physical Education and earned her Doctorate from Ohio State University. Lois taught at the University of Oregon and has had an active role with the AAGPBL. A life-long Cleveland Indians fan, she has also become a fan of the Seattle Mariners.

I had the privilege of interviewing Lois several times by phone and hope to meet her in person one day. Her knowledge of the history of AAGPBL is quite impressive, and her stories of the league making a rule change overnight are very interesting. As a baseball player and team leader, Lois Youngen would be an asset to any team.

Oh yeah, I’ve got a story I’m supposed to finish. Well, I’m running out of space and time, so I guess you can read about how a boys baseball team began, Winning with a Girl, this spring in Just Like Me: When the Pros Played on the Sandlot. 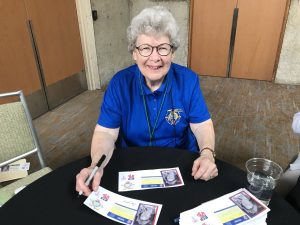