In early 2012, I met Jim Zapp at his home in Nashville, Tennessee. Jim was the first player I had the pleasure of interviewing that had begun his professional baseball career in the Negro Leagues. He was a power-hitter through and through and wasn’t interested in any of that “sissy” stuff like stealing bases. Jim began his organized baseball career in 1945 with the Baltimore Elite Giants, and in 1948, along with Bill Greason, was a teammate of Willie Mays when they played for the Birmingham Black Barons. Jim began playing integrated baseball in 1952 and promptly set the RBIs record of 136 RBIs in the Midwest League while playing for the Paris Lakers, a record that still stands. While playing for the Big Spring Broncs out of the Longhorn League in 1954, he hit 32 home runs, with a slugging percentage of .630, (as a reference, a slugging percentage of .500 is considered very good), while playing in just 90 games.

I arrived at Jim’s house, and he invited me into his home to talk about his memories of growing up playing baseball and other sports, a topic he seemed interested in re-visiting. Listening to music is something I enjoy, and my musical tastes are varied, to say the least; rock to country, big band to heavy metal, R&B to Sinatra, and one style I always enjoy, jazz. Well, the first thing I hear as I sit down with Jim is smooth jazz playing softly in the background, and without a doubt, the perfect music selection for our interview ……… So … I’ll give you a minute to tune your favorite music player to a smooth jazz station of choice, volume low, before reading any further.

Because the purpose of my visit was to talk about his memories of youth baseball, I intended to keep the conversation centered around Jim’s childhood. Still, his stories of playing baseball during WWII was very intriguing to me, so I had to remind myself to stay on task several times during our visit because if it wasn’t for a chance sighting while playing for a segregated Navy team in the small town of Aiea, Hawaii, (three miles from Pearl Harbor) Jim might have never played professional baseball.

The interesting aspect of Jim’s relationship with baseball as a kid was that he absolutely loved the game, but he didn’t play any organized baseball until he joined the Navy in 1942. Jim grew up on the Northside of Nashville, and all of the organized leagues he could play in were on the Southside. Jim’s mom was very strict, so strict that she wouldn’t allow him to go that far away and play, so his time playing baseball was in the streets and sandlots of North Nashville, with ratty balls and broken bats. Obviously, this shows that a kid doesn’t necessarily have to travel all over the country to play pro ball if the talent is there, they just have to have the exposure to show their skills at the right time, in other words, right-place … right-time, just like Jim and Navy baseball. As a toddler, Jim’s older brother gave him a unique nickname. It is a nickname that originated because of certain sounds that he, as a toddler made, and as Jim told me, “I always knew when old-timers from the neighborhood were at the game when they called out, Come-on ^@##$” (Oh, be patient, it’s in the book)

From his time playing with the Birmingham Black Barons, Jim, along with Bill Greason, developed a lifelong friendship with Willie Mays. Jim and Bill attended Willie’s 80th birthday celebration in San Francisco, and as you’ll notice in this picture (Jim is in white), Jim is bundled up tight to stave off the cold winds from the bay. When I showed Bill this picture (Bill is sitting to the left of Jim), he laughed and told me that Jim complained about how cold it was the entire time they were on the field, and someone finally brought him a blanket to warm him up. When I asked Jim about this event, he said, “Come here, let me show you something. See that Lincoln, Willie gave me that car before we left San Francisco.” He was very proud of this gift from his friend Willie Mays.

As we finished up our conversation, Jim showed me a wall of pictures from his days playing baseball. I enjoyed both seeing these pictures and hearing his stories of each team, when he said to me, “There’s only a few of us left, dog-gone-it.” It was a brief statement he made under his breath, but a statement that was very powerful in its meaning, both to him and me. Jim passed away on September 30, 2016. I wish I could have completed this project before his passing so I could again express my appreciation of the time he spent with me. 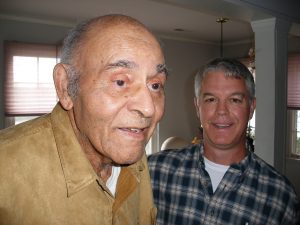 So … in honor of Jim Zapp, take a minute, relax, and enjoy some great easy listening music, and maybe, just maybe, if you were not a fan of jazz before, you will consider adding a few smooth jazz tunes to your playlist.

For more information about Jim Zapp, see the two links below.  The first link is for an article from the Negro Leagues Baseball Museum focusing on Jim’s baseball career. The second link is from the Society for American Baseball Research (SABR) and gives an in-depth look into Jim’s ancestry along with his life in baseball. https://www.nlbemuseum.com/history/players/zapp.html https://sabr.org/node/40259